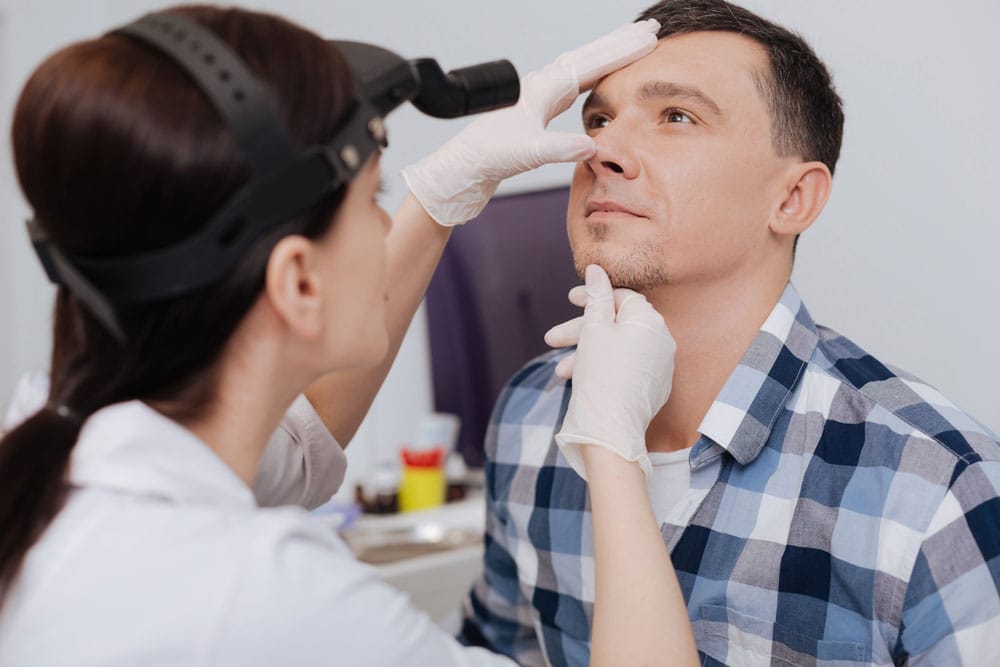 The shape of your nasal cavity could be the cause of chronic sinusitis. The nasal septum is the wall dividing the nasal cavity into halves; it is composed of a central supporting skeleton covered on each side by mucous membrane. The front portion of this natural partition is a firm but bendable structure made mostly of cartilage and is covered by skin that has a substantial supply of blood vessels. The ideal nasal septum is exactly midline, separating the left and right sides of the nose into passageways of equal size.

Estimates are that 80 percent of all nasal septum are off-center, a condition that is generally not noticed. A "deviated septum" occurs when the septum is severely shifted away from the midline. The most common symptom from a badly deviated or crooked septum is difficulty breathing through the nose. The symptoms are usually worse on one side, and sometimes actually occur on the side opposite the bend. In some cases, the crooked septum can interfere with the drainage of the sinuses, resulting in repeated sinus infections.

Septoplasty is the preferred surgical treatment to correct a deviated septum. This procedure is not generally performed on minors, because the cartilaginous septum grows until around age 18. Septal deviations commonly occur due to nasal trauma.

A deviated septum may cause one or more of the following:

Diagnosis of a deviated septum

Patients with chronic sinusitis often have nasal congestion, and many have nasal septal deviations. However, for those with this debilitating condition, there may be additional reasons for the nasal airway obstruction. The problem may result from a septal deviation, reactive edema (swelling) from the infected areas, allergic problems, mucosal hypertrophy (increase in size), other anatomic abnormalities, or combinations thereof. A trained specialist in diagnosing and treating ear, nose, and throat disorders can determine the cause of your chronic sinusitis and nasal obstruction.

After discussing your symptoms, the primary care physician or specialist will inquire if you have ever incurred severe trauma to your nose and if you have had previous nasal surgery. Next, an examination of the general appearance of your nose will occur, including the position of your nasal septum. This will entail the use of a bright light and a nasal speculum (an instrument that gently spreads open your nostril) to inspect the inside surface of each nostril.

Surgery may be the recommended treatment if the deviated septum is causing troublesome nosebleeds or recurrent sinus infections. Additional testing may be required in some circumstances.

Septoplasty is a surgical procedure performed entirely through the nostrils, accordingly, no bruising or external signs occur. The surgery might be combined with a rhinoplasty, in which case the external appearance of the nose is altered and swelling/bruising of the face is evident. Septoplasty may also be combined with sinus surgery.

The time required for the operation averages about one to one and a half hours, depending on the deviation. It can be done with a local or a general anesthetic, and is usually done on an outpatient basis. After the surgery, nasal packing is inserted to prevent excessive postoperative bleeding. During the surgery, badly deviated portions of the septum may be removed entirely, or they may be readjusted and reinserted into the nose.

If a deviated nasal septum is the sole cause for your chronic sinusitis, relief from this severe disorder will be achieved.